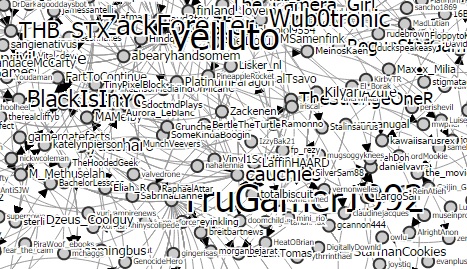 On September 3rd, #gamergate was the top trending tag on Twitter. This is an impressive feat for several reasons:

1) It was Beyonce’s birthday. #happybirthdaybeyonce was only the SECOND most popular tag.

2) It was in no way related to mainstream media.

The tag #gamergate refers to a discussion happening between game developers, journalists, and enthusiasts following a series of events Erik Kahn concisely explains in GamerGate: A Closer Look At The Controversy Sweeping Video Games.

To state it briefly, ex-boyfriend of game developer Zoe Quinn wrote a blog post claiming Zoe had slept with members of the press for positive coverage on her new game, Depression Quest. Following this, Zoe gets doxxed, (that is, her public information is released online maliciously), and she begins getting harassed. If it were typical harassment, that would be awful, but she receives several death threats, so it’s even worse. Several members of the gaming community stood up to defend Zoe, and bad things begin to happen to them as well. Phil Fish, developer of indie darling, Fez, and owner of Polytron has his Twitter account hacked and the Polytron website is taken over by hackers. This leads to Fish deleting his Twitter account and declaring that he no longer wishes to be associated with the games industry, or its fans. Dan Golding explains in his piece “The End of Gamers“:

Campaigns of personal harassment aimed at game developers are nothing new. They are dismayingly common among those who happen to be women, or not white straight men, and doubly so if they also happen to make the sort of game that in any way challenge the status quo, even if that challenge is only made through their very existence. The viciousness and ferocity with which this campaign occurred, however, was shocking, and certainly out of the ordinary. This was something more than routine misogyny (and in games, it often is routine, shockingly). It was an ugly spectacle that should haunt and shame those involved for the rest of their lives.

Several other publications chimed in, including Kotaku, Gamasutra, and Polygon. Later that week, Host of gaming vlog, Feminist Frequency posts a piece titled Women as Background Decoration. The threats she receives following this are so direct she is forced from her home.

Despite the large number of publications cited so far, a large bulk of the discussion unfolded on Twitter under the #gamergate hashtag. I have compiled a public archive of several thousand tweets using the tag #gamergate using TAGS here:

TAGS Explorer: A Visual Representation of the Twitter Conversation (please wait for it to load!)

The conversation was happening so quickly, every time TAGS retrieved Tweets from Twitter, it would freeze and become inaccessible for hours as it compiled the archive. That said, these tweets were collected over the course of two weeks, often hundreds at time, between September 1st and September 10th. Weeks later, and #GamerGate is still receiving roughly 100 tweets per minute. I have met the limit on the size of my archive, but if anyone is well-versed in google docs and spreadsheets, I would love some assistance moving tweets into a new sheet so that I can continue compiling tweets. Please contact me ASAP.

•Related hashtag, #notyourshield, appears 1021 times throughout the 4000 tweets archived. #notyourshield is a tag that is supposed to be used by under-represented members of the gaming community, namely women, minorities, and LGBT, who claim that primary video game media outlets discuss the representation poorly, and often in place of the real issues (such as collusion between game developers and press).

•”SJW” appears 375 times throughout 4000 tweets archived. SJW is short for “Social Justice Warrior” a pejorative term for those who defend the rights of under-represented groups online.

•”Destiny” appears 140 times. Around the time these tweets were compiled, Destiny was on the verge of being released. Many tweets using this tag expressed that the release of Destiny would not slow the discussion circulating around #gamergate. This ended up being true.

•”Polygon” appears 475 times. This is the name of a publication that is outspoken against the doxxing of Zoey Quinn, and has many well known and respected female writers on staff. At one point, many were Tweeting that Polygon was banning users on their discussion boards speaking out against Anita Sarkeesian.

•”Kotaku” appears 291 times. Zoe Quinn was implicated for having relations with a writer who worked for this publication.

Using a data tool, I discovered that as of this post over 775,000 tweets have been tagged with #GamerGate. If my 4000 tweets seemed like a large set of data, I am sorry to disappoint. I found a service called HashTracking that would retrieve the full history for me, but it would cost 2.00$ for every 1,000 tweets… so… more money than I have. Another service, Keyhole, offers a real-time view of the hashtag over several social media platforms at once. They also offer historical archives, beginning at 49$. I am currently waiting on them to send me a quote on the cost of my 775k tweet archive. If it’s not over 200$, I will probably suck it up and pay… but I won’t like it.

That said, KEYHOLE IS AMAZING. If you did not click the link to Keyhole above CLICK THIS NOW. Unfortunately, they only offer a 3-day trial; an actual account starts at 130$/mo. You might notice the link I’ve provided dates between August 30th and September 2nd. Because of this, their keyword spread is much different than mine, with the top related tag being #justgamingjournothings.

The biggest problem with archiving this set of tweets is that it’s such a large, unwieldy, and lively set of data. For three weeks it’s been twisting, turning, busy, and relevant. Clearly others have also had difficulty retrieving and dissecting data from Twitter, which is why services like Keyhole and Hashtracking exist, and charge such high rates. Furthermore, as the #gamergate discussion has been going on for roughly three weeks now, looking at a 4000 tweet snapshot of data may not be good enough. In fact, looking at any dataset smaller than the whole thing might not be good enough. My goal is to capture, compile, and dissect the whole event, and because it has taken weeks to unfold, to capture anything smaller than its absolute form would be an injustice… but who has 1500$ to pay for a set of tweets? A big business maybe, not me. Sure, one could work within the limitations of Google Docs, constantly moving the data into new spreadsheets whenever the need arises… but from August 30th and September 2nd, 100,000 tweets were posted. A spreadsheet fills up in 4000, meaning that in 3 days, you would need to edit your script 20 times to take into account new archives, and there’s no doubt that some data would fall between the cracks considering the archival tool would freeze for hours sometimes when updating, therefore archiving a set of  data this large using free, easy to use tools would be more than just a full-time job, it would be impossible.

There are certainly more things that I want to try out with TAGS. I could certainly see how it would be useful to track a smaller conversation, such as our class tag, #dhpraxis14 . I DO plan to find a way to access the entire archive of tweets for #gamergate, as I believe that it might be of some significance later on.

While I do not think this is the place to post my full opinions on the subject, I agree with Dan Golding, who states that the term “gamer” and the connotations behind it are dying. Jesper Juul alludes as early as 2010 in Casual Revolution  (which Steven Jones referenced in ch. 1 of his book, which we read this week), whether they be on a mobile devices or on Facebook, that everyone plays games now. We don’t need a word for “gamer” in the same way that we do not need a word for one who reads books or watches films. Creating this kind of terminology has the possibility to create lines of division between those who “do” and those who “do not”. Either way… don’t we need a pristine, complete archive of that? Should I pass around a donation jar?

8 thoughts on “There’s a lot of money in Twitter archives. Also, a Data-Driven Look at #gamergate”