TANDEM 0.5 will be moving from it’s heavy development phase into a testing and forward-facing design phase this week. At the time of this posting, Steve and Chris are still working out the specifics of functioning unified code, but testing of the independent scripts has begun to a certain degree of success. Text and image values are easily generated via independent processes.

This week we also discussed the idea of data persistence with some depth. Simply put, would someone be able to access the data they generated at a later date via the TANDEM ui. At this iteration of the software, we agree that this is a valuable component, but not an essential feature for an MVP. That said, we are thinking about both the code needed to run it and the user-specific UI that would accompany such an application.

We are working away at unifying TANDEM’s independently functioning image and text codebases. We are aligning the code in a single python script file. We vetted an idea to have two scripts, one for image and one for text, run simultaneously. The decision was made that for this first iteration of TANDEM, a single .py will suffice, and in fact may be more maintainable and more efficient.

The code merge has been slow due to python versioning issues which lead to the code producing different results on different machines.

A call is scheduled for Tuesday with Tim at Reclaimhosting to work on configuring the server to run Django. Meanwhile the developer is working through the very thorough Django tutorial and also trying to begin the defined appropriate class objects for a potential future version.

Immediately following the code merge, we plan to begin implementing our user interface. A full size mockup of this is still under version control as we explore new grounds with user-specific views and the possibility of in-browser table views of the .csv data that is generated.

TANDEM continues to reach new communities. We have a lead, thanks to Sarah Cohn. The Biodiversity Library is currently crowdsourcing their seed catalog archive project, and in advanced versions, TANDEM might improve their information collection. http://blog.biodiversitylibrary.org/2015/03/help-us-improve-access-to-seed-and.html Jojo will contact them once our prototype is more stable.

Additionally, Jojo spoke with Grant Wythoff, who reasserted TANDEM’s relevance to Bill Gleason’s project at the Cotsen Library. Jojo will reach out to Professor Gleason again this week. Grant also recommended we contact Natalie Houston at University of Houston regarding her Digital Victorian project on the visuality of poetry.

Jojo also attended the DjangoGirlsNYC event at the Stack Exchange. In addition to familiarizing herself with the framework in which TANDEM will eventually operate, she made useful contact with other django developers working in NYC.

Our group’s current goal is to locate a domain expert. In this point, we need to decide whether we keep our site in Bootsrap or tansfer tp a Django framework. We considered creating a separate page on the site showing only a map, and points on the map indicating where a photo was taken. Below or on the same page would be options to organize the map by the five borough.

The developer (Tessa) is researching API access and possibly subscribing to a service that can send us instagram photos with tag data.

The project manager (You Gene) installed MySQL. Currently, I am figuring out what is cmd and how to open the command-line Interface. Black-white screen has to show up.

We divided our roles to make our technology work out. This time each role is fluid compared to the previous works.

Currently, Instagram carries more than a million images of #sprezzatura.  We should start learning API and MySQL for data mining. To solve the technology parts, we visited Digital fellows at the media lab. My SQL  fundamentally interact with data and establish the connection between the server. One of the digital fellows Even said we need to set up the local copy of My SQL. He also suggested to learn API Python. I will look over Python Library as well.

The developer, Tessa approached Shelley Bernstein at the Brooklyn Museum, but we could not access her. Anyway, her tagging project was very useful.

Limitation: Instagram API does not offer geospatial information. In this stage, we should find third party applications for the mapping.

For coding, we need text wrangler which functions as text editor, program scripts, and code translator. The outreach, Renzo is using Filezilla for coding. Also, Renzo and Minn (Designer) started working on mapping. They installed the program called R and GGmap. Those two programs interact with google map and import images from google map. Also they provide information of longitude and latitude based on the google map.

Overall, our team is focusing on updating the webpage and learning new technologies including coding and programming. WordPress doesn’t fit to our project. 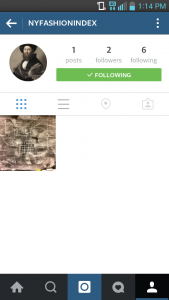 As previously mentioned, we chose Python to incorporate data set from Instagram API.

It would be necessary to utilize My SQL for geospatial libraries. For data mining, we focus on collecting geospatial tags in NYC areas to analyze fashion. Using relational database will fit for our project. We are planning to incorporate multiple data sets e.g.) hashtags+Images+Link between images and hashtags+ Iocational information (where the pic was taken, neighborhoods)

Ren and Tessa met Prof. Gold to get feedback for our projects. First of all, our project has to emphasize the “analytic research angle.” It would be better to observe patterns across multiple data sets. Also, we discovered the fact that crowdsourcing was unpredictable and unreliable. Regarding to this matter, we would rather lean more towards curated approaches for our project.