The Freedom to Move 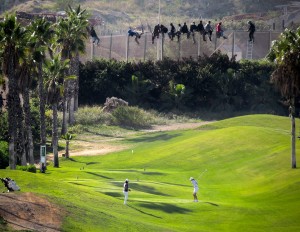 José Palazon/Reuters
African asylum seekers stuck on a razor wire fence, behind white-clad golfers teeing off on a golf course.

I started this data set project a couple of weeks ago, but it has taken me a while to post and share. I think I was looking to show something “more”- more complete, more thought out, more visually appealing, more theoretically/methodologically sound, etc. And then I realized that “more” probably won’t come if the project is sitting idly in Tableau, unseen by others. While I love the idea of collaborating, I’m still getting used to the idea of sharing incomplete things in the process. My lack of technological savvy also had me guarded for a while. Luckily, seeing everyone’s impressive progress and feedback to others have given me more courage to just share what I’ve done already.

In my income and inequality class, a great class filled with data, Professor Milanovic led me to a study on travel freedom, The Henley and Partners Visa Restrictions Index. I haven’t had the chance to do additional research on this for-profit organization, which I would conduct if I were to pursue this further. The survey received a substantial amount of media attention and Wikipedia based its “Visa requirements for United States citizens” page on this survey. I mention the media and wiki attention to this survey to not verify its reliability but to show the survey’s influence.  In Prof. Milanovic’s class, we were looking at migration as a means of addressing global inequality (the income inequality between countries) but there are travel restrictions in many areas of the world that would benefit the most economically from migration. To make this connection clearer, I matched the country’s travel freedom ranking with its 2013 GDP, provided by the World Bank. Several other organizations, such as the UN, IMF, CIA, track GDP, but I decided to go with the World Bank’s numbers.

The visa restrictions indez was in a pdf with multiple columns, which required some text cleaning after pasting into a text editor, Notepad++. I had to learn about regular expressions in order to do this efficiently. Pretty simple, I had to replace SPACE with TAB, but I also had to keep in mind of multi-word nations like Central African Republic or United States. It wasn’t a clean find and replace at the end, so I had to clean up some things manually. But overall, a great tip I picked up at Micki’s data visualization class.

I then saved the file as a csv. I created another column to insert GDP data from the World Bank’s data repository, which is a great source of information. I downloaded a spreadsheet that included the GDP for each country for every year since 1980. I was interested in the latest, 2013 data. Inserting this information required some more manual work. I’m sure I could have used an Excel function, but after spending some time looking for that function, my impatience got the best of me and I decided to do it the not-so-quick and dirty way. I copied and pasted after I put the countries in alphabetic order. For the most part the naming conventions were the same, so it didn’t take very long. If I were to do this again, I would definitely figure out how to do this correctly, but I was didn’t want to lose my momentum. 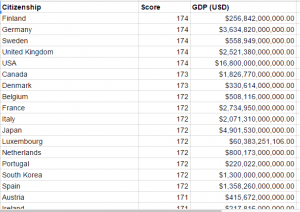 I decided to use Tableau to visualize this data. I wanted to highlight the geographical aspect of this data, as we are talking about visa and travel freedom. I thought it would be interesting to see where the clusters of countries with the highest travel freedom are in comparison to countries with the lowest travel freedom. I didn’t know how to show GDP simultaneously besides showing up in the bubble when you hover over the countries. Here is a snapshot of the map. You can go here for the “interactive” version, where you will see the GDP information. 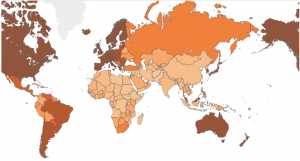 The field of economics, as one would expect, is extremely data-heavy. Our professor would leave his Stata codes at the bottom of his slides in case we wanted to recreate them. As a non-economics major, the hard numbers/algorithms stuff made me a little nervous, but I was also excited in seeing these types of sociological patterns. Visualizing these patterns are important because of its potential to raise awareness and political activism. Letting them stay hidden in industry publications or esoteric economic conferences won’t do much good, but publicizing and presenting them in ways that will grab people’s attention, might. The media has been really flexing its data visualization muscles recently. That being said, I was really happy to hear about the GC’s potential course crossovers with the Journalism School. It might give me a chance to keep pursuing this data project.

4 thoughts on “The Freedom to Move”