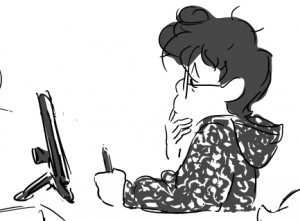 I was thinking about how many artists and content creators make use of social media sites specializing in sharing such as tumblr, Deviant Art (which has frankly been waining in popularity), Soup (a newcomer to the scene), and Pixiv (a Japanese outlier), to get their material out there. Some people post on these sites as part of their hobby, for some they are hoping to break into a scene, and others make these sites their very livelihood. These creators range in profession from storyboard artists and showrunners for major television networks to professional comic authors to amateur/hobbyist illustrators. For some their content is their job, for others it is their passion, and for a lucky few it is both.

All of these sites have their own unique interfaces and qualities, but they all provide a very basic means for its users to indicate a level of approval for the content that is posted and then disseminate said content among other viewers. All of these sites also attract a wide range of content creators from many different regions. Off the top of my head, on tumblr I follow an artist in Arizona, two in Germany, a handful in Japan, one in Aruba, a bunch in New York and New Jersey, a sizable chunk in California, two or so in Mexico, one in Spain, an Englishman, and I think an Australian or two. Many of these content creators have followers ranging from tens, to hundreds, and some of them have thousands. Their styles are disparate (though their seems to be a general commonality in their age range), though their followers intersect like hundreds of tiny venn diagrams.

The data I wish to extrapolate is where are the people that are “liking” this content? Is there any correlation between the content posted and where the people are that “like” it? Is there any commonality between where a content creator is from and where her or his fans are from? On a site like tumblr content posters can add tags for those searching for a certain subject, but it’s a rather crude system and when someone reblogs a picture the tags are rarely maintained. I still need to figure out the logistics, but I want to try and map regional data with tags and content creators and see how it all connects.

As an aside, I also saw a curious news item on a Spanish retro-gaming blog (http://www.repisanintendo.cl/post/101105828474/japon-podria-comenzar-a-enfrentar-un-irreversible). The basic gist is that with the rise in interest in retro gaming from various podcasts, collectors, YouTube personalities and and the like, it seems that Japan’s vintage game stores, particularly in Tokyo have been seeing their stock become rapidly depleted by tourist collectors. I can’t put my finger exactly on what data to extract from this or how, but I feel like there’s something fascinating to be found.