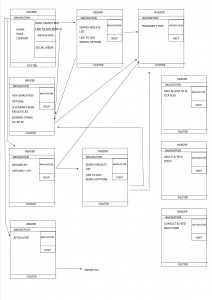 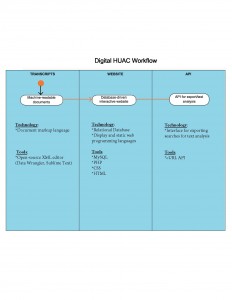 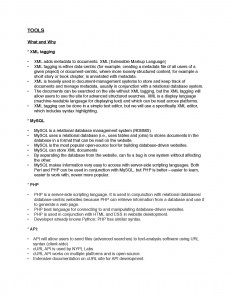 The documents (which are already scanned) will be manually tagged using an XML editor according to identified categories, then read into an open-source relational database (MySQL), which reads XML documents. The MySQL database will be incorporated into the website using PHP in conjunction with the site (syntax—PHP within the HTML/CSS site schema). Finally, the API will allow users to export their searches to text-analysis resources.

We’ve identified a number of historians, librarians and archivists, and digital humanists to potentially work with on this project and are in the process of reaching out to them in an advisory capacity. We seek guidance on our taxonomy and controlled vocabularies in the short term, and on future developments of our project beyond the scope of this semester.

At the top of this list are historians Blanche Cook and Josh Freeman, CUNY professors and experts on the HUAC era. Steve Brier is in the process of introducing us to both Cook and Freeman. Other historians include Ellen Schrecker (Yeshiva), Mary Nolan (NYU), Jonathan Zimmerman (NYU), and Victoria Phillips (Columbia), each with subject expertise and research experience on the time, events, and people central to Digital HUAC. We have also identified Peter Leonard, a DH librarian at Yale; David Gary, the American History subject specialist at Yale who holds a PhD in American History from CUNY; John Haynes, a historian who served as a specialist in 20th-century political history the Manuscript Division of the Library of Congress; and Jim Armistead and Sam Rushay, archivists at the Truman Library, as potential advisors.
We have narrowed down the corpus of text that we’ll be working with to include 5 transcripts: Bertold Brecht; Ronald Reagan; Ayn Rand; Pete Seeger; and Walt Disney. This list of major cultural figures spans the hearings themselves and features both friendly and hostile witnesses, offering users a varied look into the nuances of interrogation. It is our opinion that by focusing on a witness base of recognizable figures that is thematically organized, users may examine their testimony as individuals and in context with one another. This quality of the HUAC hearings cannot be understated, and Digital HUAC seeks to draw attention to it through the overall user experience.