I swear I am creative. and visual. 🙂

I work at bronx Community College and I have been trying to engage with the campus history. Bronx Community College used to be NYU at the turn of the century, NYU constructed a Hall of Fame for great Americans. It is a stone colonnade and every few years they had this nationally published event to induct people into the hall of great americans. People from all different fields of study all great for being Americans. There was a democratic-ish nomination process that is VERY well documented and then the Hall of Fame Delegates had the final vote about who got inducted. The last person was inducted in the 1970’s right after the campus was sold to CUNY from NYU to become Bronx Community College. Here is a link to the google doc for all the data I collected about each hall of fame inductees. I created a tiny data set made of all the information we have in different pamphlets about the Hall of Fame busts.

I started by separating the figures by subject.

Then I thought I could build something more complicated. This PDF. is supposed to be 2ft by 3ft thats why you have to zoom in to see stuff. I built it with layers in Indesign.

I like this size of data set because it is manageable and I think it gives some real information about this historical architectural spot. This historical landmark represents a national identity that is defined mostly before the second world war. The people who were involved with this landmark were thinking about this country in terms of the civil war. That just blows my mind. Looking at the life spans of each inductee tells a story about how people at the turn of the century were mapping out this nations history and identity. Building this visualization from this little pamphlet dataset allows me to speak very assuredly about the history of this landmark.

LOOK HERE FOR MY POSTER: 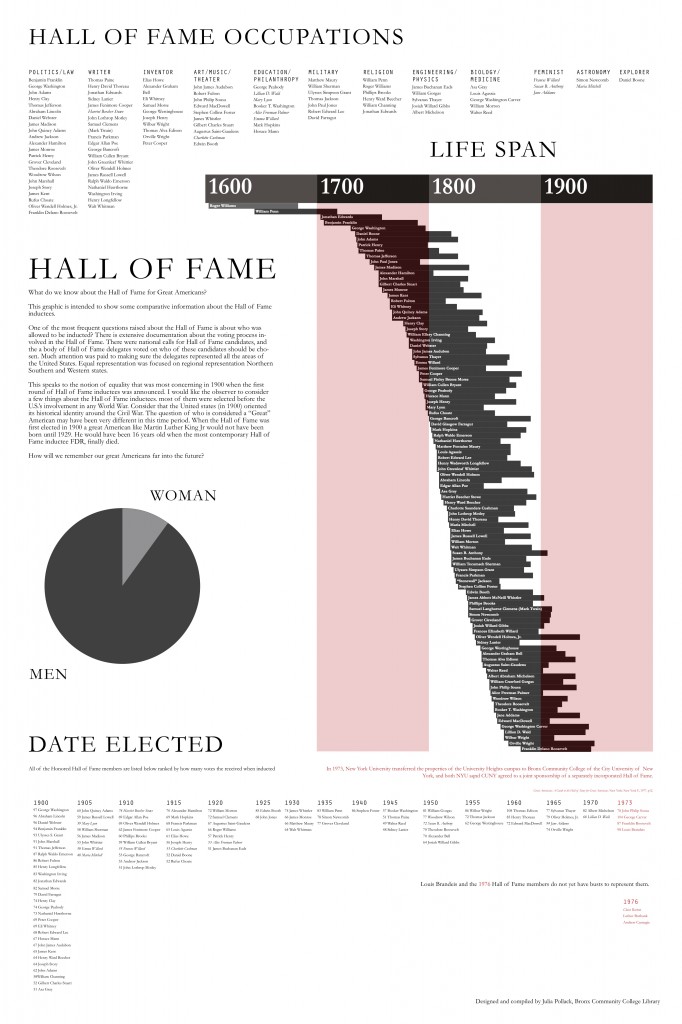