On the image processing side of things, Chris has identified the syntax for generating our key values. Now we are working toward stitching the pieces together in a way that makes sense for our output. The extreme minimum of computer vision is accessible via OpenCV and while the possibilities are tantalizing, we have continued to keep a direct focus on the key pieces we need to access for the mvp. TANDEM is still on track.

We have also begun to reevaluate our progress. To do so, we created a new list of dev tasks that range from bite-sized to larger steps so we can visualize how much further we have to go. Steve has been doing a great job of keeping track of progress and using git for version control of his scripts.

In addition we successfully implemented a routine to convert PDF to TXT. Input files are screened by type. If they are JPG, PNG or TIFF, they are passed to Tesseract for OCR processing. If they are PDF they are passed to a PDFMiner routine that extracts the text. In each case the program writes TXT files to “nltk_data/corpora/ocrout_corpus” with a name that matches the first order name of the input file. The latest version of the backend code is here: https://github.com/sreal19/Tandem

Web functionality remains problematic. Most effort this week has been merely trying to get through the Flask tutorial.

To end on a positive note, developmentally, good progress has been made with Text Analysis processing. We are computing the word count and average word length for a single page. The program also creates a complete list of words for each input file. In the very near future work will be completed to create a list of unique words and the count of each. The team must make a decision about whether to strip punctuation from the analysis, since many of the OCR errors are rendered as punctuation.

We’ve been working to identify the ideal UX functionalities for javascript. Most of this was fairly straight-forward, such as giving the user the ability to browse local folders & view a progress bar of the upload/analysis. It has been difficult to locate a script to produce error messages. Searching for anything involving “error” in the name retrieves a different type of request, and “progress” only gets to half of the need.

For instance, we had discussed having the ability to let users identity upload/analysis errors by file, either with a prompt on the final screen or with indicator text in the CSV output. Such a feature will provide the user with the ability to go back and fix the error for 1 file, versus having to comb through the entire corpus and re-uploaded. An example of how this would look would be something this, with text & visual cues that indicate that  which file needs review: 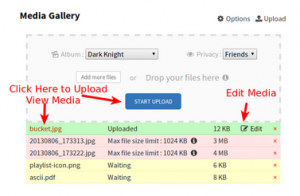 There is some documentation on Javascript progress events and errors, but we need to need to discuss how it could be employed for TANDEM, and whether its necessary for the 0.5 version.

Twitter continues to be the primary platform for outreach. While #picturebookshare continues to chime away, we are also now using it to generate research ideas for potential TANDEM users. Fun distant futures for TANDEM might involve the visual trajectories of various aspects of books: visuality of covers or book spines, as well as the visual history of education materials.

Jojo spoke with Carrie Hintz, who has is starting a Childhood Studies track via the English Department, to see if she knew anyone studying illustrated books at the GC. She has no leads yet, but said come the fall she would have a better idea of people interested in TANDEM. Meanwhile, Long LeKhac, an English PhD at Stanford, was giving her a sense of the DH scene there and said he would ask around the DH community beyond Moretti’s lab. Jojo is in the process of devising outreach to text studies experts — Kathleen Fitzpatrick at MLA, Steve Jones — and folks in journalism — Nick Diakopoulos, NICAR and Jonathan Stray, per Amanda Hickman’s suggestion. Keep on keeping on — keep the tweets t(w)eeming.

Team TANDEM is working fast and furiously on all fronts. We’ve hit a few snags but all told, we feel like we’ve got a handhold on the mountains we’re climbing. Here’s a brief overview of the ups and downs of the week:

In development we’ve got a working program for OCR and NLTK (Go Steve!), and we’re making strides in OpenCV (Go Chris!). Lev suggested that we have two different types of picture books for our test corpus — one that’s rich in color, another that’s more gray-scale with more text. These corpus variations will show the range of data values available to future users of TANDEM. Kelly’s working on scanning an initial test corpus now. 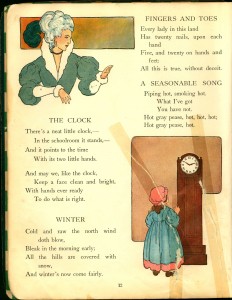 We also have our hosting set up with Reclaim thanks to Tim, as well as a forwarding email domain. Go ahead and send us an email to dhtandem@gmail.com.

In design/UI/UX Kelly has been working on variations of a brand identity, for color schemes, logo, web design elements… all of it (Go Kelly!).

The UI is primed to go now that we have hosting for TANDEM. Kelly is currently working on identifying the code for the specific UI elements desired, for an “ideal world” situation. The next steps for design/UI/UX are to pick a final brand image, and apply it to all our outreach initiatives.

In outreach, TANDEM had a good meeting with Lev on Wednesday. He seems to think we’re doing something other DHers aren’t quite doing. We’re not yet convinced that it’s not just because it’s crazy hard. Either way, we’re up for it. Otherwise, Jojo has been working it hard (Go Jojo!) on all outreach fronts. This week we received interest from Dr. Bill Gleason at Cotsen Children’s Library at Princeton, where they’re working on ABC book digitization and seem especially interested in our image analysis. This response is proof of relevance in the field.

In regards to social media, we now have a proper twitter handle, which we will admit happened in the middle of last week’s class thanks to some pressure from Digital HUAC already having one. You can follow us @dhTANDEM. More on Twitter: TANDEM had a couple really useful retweets (hurray Alex Gil, massively connected Columbia DHer!) that generated some traffic on our website (jetpack has us at 138 views so far, which is not a ton, but it’s a start!) and has won us some good DH followers — @NYCDH, @trameproject. We’ve transferred #picturebookshare to the @dhTANDEM account, and inviting our followers to participate, as well as use it as a means to suggest additional items for our test corpus. 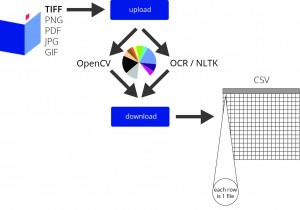 Because TANDEM is leveraging tools that already exist, one very basic minimum deliverable is that TANDEM makes OCR, NLTK, and OpenCV easy to use. Moreover, if TANDEM itself is not easy to use, there is no inherent advantage in using TANDEM over simply installing the existing tools and running them.

TANDEM as this minimum deliverable would solve the issue of having these tools in a web based environment, relieving users of the laborious headache of installing the component elements. Even after installing the component elements a user would likely have to write code to obtain the required output. TANDEM will shield the user from that need to be a programmer. At this minimum deliverable, TANDEM has not wrapped the three together into a single output.

A second, more advanced minimum viable product would be to have a website on which a person could upload high resolution TIFF files, press a “run TANDEM” button, and receive a .CSV document containing the core (minimum) output.

The minimum output will consist of six NLTK values (average word length, word count, unique word count, word frequency (excluding stop words), bi-grams and tri-grams) and three image statistics for each input page provided by the user. We hope to expand the range of file types that we can support and to improve the quality of our OCR output, as well as build more elaborate modules for feature detection in in both text and illustrations. However,  we contend that demonstrating the comparative values of a couple corpora of picture books will prove that there is relevant information to be found across corpora with heavy image content.

We are shooting for a single featured MVP. A user comes to www.dhTANDEM.com and uploads a folder of image files following the printed instructions on the screen. They are prompted to hit an “analyze” button. After a few moments, a downloadable file is generated containing OCR-ed text, key data points from the OCR-ed text, and key feature descriptors from the overall image. This is purely for an early adopter looking to generate some useful data so that they can continue working on their story and/or data visualization.​

Overall things are going swimmingly. But of course there are concerns. This weeks concerns range from:

These are, of course, huge questions. But to put it all in perspective: Stephen Zwiebel told Kelly this week that DH Box was held together “by tape” at the time of the final project presentations, and that it has had a lot more time in the past 9 months to become stable. Not to say that we aren’t looking to have a (minimally viable) product come May, but it’s a good feeling to know where other groups were last year. Should we be sharing that widely with the class? Well, we just did. 🙂

a bicycle built by four, for two (text AND image)