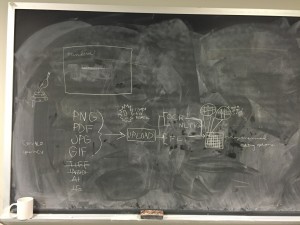 User Story #1: A forensic computational linguist doing research on how interviewing style impacts witness responses. The value of the site to the user is being able to compare friendly vs. unfriendly witnesses (difficult to determine in general court transcripts) and the sheer number of available court transcripts available (also difficult to collect re general court transcripts). The person clicks the API link and follows the prompts to extract a cluster of readings from unfriendly witness testimony, and does a second export for a cluster from friendly witness testimony. The API exports the two corpora into an intermediary location (such as Zotero), which can be used with Python (NLTK) to compare, for example, the number of times interviewers repeated question for friendly vs. unfriendly.

User Story #2: High school civics & US history teacher, Chris. He is wants to assign the students to search the archive to find primary source documents from the McCarthy era. Students will have a list of topics and names to choose from as their research areas. Chris tests the site to see if it will be useful to his students. Chris uses the simple search box to search for both topics such as ‘treason’ and ‘democracy’. Chris uses the advanced search options to combine topics with names.  Chris is looking for clean results pages, the option to save and export searches, and help with citation.

User Story #3: American Political Scientist, Jennie, doing research on US government responses during periods of perceived national security threats. Specifically, she is interested in the Foreign Intelligence Surveillance Courts (FISC), which are closed courts. Jennie wants to read about now-released documents that record the conduct of closed courts. Jennie wants to do mixture of qualitative and quantitative analysis. Qualitative: Jennie uses the advanced search to specify she wants only to look at hearings that have been identified in the category as ‘closed’ hearings, then does the same to specify only ‘open’ hearings. Quantitative: Jennie uses API and follows the prompts to extract data with the category ‘closed’ and date filter to do a statistical analysis of number of closed trials by year and how/if correlated to outside events.